Three of our new 2017 scholarships were awarded to students with disabilities.  We were fortunate to come to know Violeth, Irene, and Zulfa and we share their stories very briefly with you. 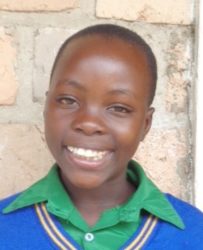 Violeth experienced some physical and developmental disabilities either at birth or at a young age.  The diagnosis is not clear due to the lack of experienced doctors who hae seen her, but she began walking at age four and was not able to join a public school until age eleven.  Violeth’s mother left the family after her birth and, since then, the father’s fishing income has sufficed only to feed and cloth his family.  We brought Violeth to Bethania English Medium Primary School in Kemondo in 2017.  Since then she has flourished.  She is happy and is performing well. 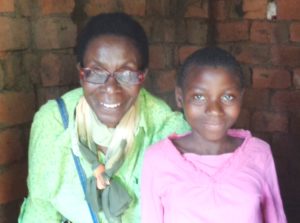 During a home visit to the Damian family during our August visit to Tanzania, we discovered an unexpected candidate.  While interviewing candidate Winston, we also became inspired by his twelve year old sister, Irene.  Irene cannot hear or speak, but a deep intelligence radiated through her presence. Unfortunately, she had never attended school.  Her attempts at joining a special school had been unsuccessful.  GLK associate, Philemon, recalled another school for children with hearing impairments and made the connection for us.  Irene’s mother and Philemon were able to travel with her to join this school in Muleba.  The family has been discouraged since the death of the children’s father last year, and we are glad to give Irene this opportunity. 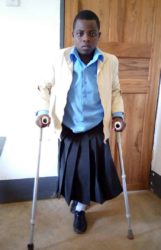 Zulfa is an orphan who lives alone.  She was able to begin secondary school with the help of an uncle who later died, but during her second year, a fire in the dormitory caused her to fall from the third floor and become injured.  Her disabilities from that accident affect her ability to walk.  Despite that, Zulfa was able to finish secondary school and begin studies in IT at a local vocational school.  She came to us highly recommended and since there is no one to support her studies, GLK was glad to help her gain practical and important skills for her future.