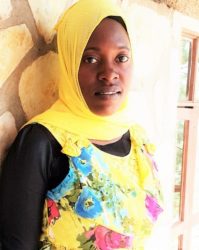 Ziada is a twenty-one year old young woman from the Muleba district, about 160 kilometers away from GLK Student Fund’s home base in Bukoba. Ziada grew up with her twin brother Maulid. Both Ziada and Maulid shared a rather precarious upbringing. They were initially raised by their father and mother, the latter of whom suffered severe mental illness. Their father, under the strain of his wife’s condition eventually abandoned his children and later died.  Their only other relative is a maternal grandmother who is partially blind.

In spite of these challenges, Ziada persevered through her education. She excelled in her studies at Kishoju Secondary School. She is so far one of only three students from this high school to pass the national secondary school examination, as well as the only girl to do so. Ziada has ambitions to pursue her Bachelor’s of Education at the University of Iringa. However, Ziada needs your support in order pursue her career path.

Because we believed in Ziada’s commitment to her education and her ability, GLK Student Fund has advanced funds for her to begin a three year degree.  The costs were approximately $2,500 per year.  We are happy to report that Ziada was graduated in 2019 with a teaching diploma.  Congratulations Ziada!