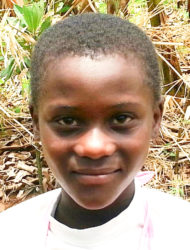 Sima lives with her widowed mother.  Her father died in the beginning of 2013. Although he was a government employee, his retirement rights were bequeathed to his mistress, with whom he has a younger male child.  Thus the wife, received nothing except the house and small plot in which they live. She is a hard worker, doing piece work, cutting and selling grass for mulching, etc. in order to make ends meet. Her children are highly gifted academically and she really wished for her little girl, Sima to get good education in a good school, but she cannot afford to pay for it. Sima is a very confident young girl who believed the government would place her in a school for gifted students.  She has ranked number one student in her class since grade 1.

She began high school studying at a government secondary school, but it was not adequate for Sima’s abilities.  The GLK Student Fund took her to an excellent private secondary school, Katoke Lweru Secondary School, and the head teacher accepted her for beginning in Form One in 2016.  Near the end of that year, the head teacher assured us that Sima was doing well, learning English and that she would succeed in catching up to the school’s standards and move on to Form Two.  (It usually takes a year for government school students to catch up to the higher standards of a private school.)

We visited Sima in October 2016 and were so pleased to see her happy and thriving at Lweru SS.  Other, older GLK Scholarship students have taken her under their wing to help her feel at home there.  Sima’s mother met us in Bukoba town with gifts of thanks that week.