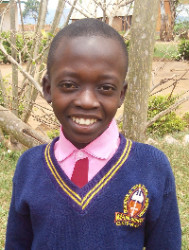 We introduced you to Frank in October of 2014.  He is a VERY bright boy whose family had fallen on very difficult times.  We were concerned that Frank’s potential was being cut off at a very young age.

Since 2014, we have helped Frank to graduate from Imani English Medium Primary School in Karagwe.  Because of his ability and hard work, Frank passed the Primary School National Examinations with outstanding results and was selected to join one of Tanzania’s national special schools designated for gifted students. This is a difficult challenge for many students as the selection requirements are quite rigorous.

Due to his impeccable results, Frank will be attending Bwiru Boys Secondary School is located in the North Western part of Tanzania, Mwanza Region. It is about 1,100 km from Dar es Salaam, Frank’s home district. Though he will be far away from home, it will be an invaluable learning experience for Frank and he will be able to learn alongside some of the brightest and most hard-working students in Tanzania.

GLK is proud that it has contributed to providing the best learning environment for Frank in Primary school education which established a firm foundation for his education and we wish him a success both in life and studies.