Aivan is one of our newest scholarship students.  He came to us via Trustee Grace, who is the director of nursing at Bunazi Health Clinic, an important health center for the area between Bukoba (Lake Victoria) and the Ugandan border.  She introduced us to the son of one of her former colleagues….someone she respected and appreciated over the years.

Traditionally, in Tanzania, health care workers were able to be hired even if the worker wasn’t fully qualified.  However, since the new Tanzanian President Magufuli has taken office, one of his goals is trying to make sure that every government employee is fully qualified.  While this is a noble goal which corrects a long history of hiring those without the proper qualifications, this has also resulted in the firing of many practically able employees who are technically under-qualified.  One person fitting this description is Aivan’s mother.  She has spent years serving the Bunazi community, but without an official qualification.  At the end of 2017, she, along with many health assistants lost their jobs. She moved back to her family farm in Karagwe, and will not be able to support Aivan in a good school.

Aivan’s ability and intelligence is so evident that GLK decided to make an emergency payment at the end of 2017.  We have committed to supporting him through elementary school.  He is at the top of his class and deserves this chance.  He had a straight ‘A’ average in class one (first grade) with the exception of a ‘B’ in French. We look forward to seeing his progress. 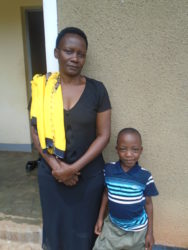 Aivan with his Mother

Ziada is a twenty-one year old young woman from the Muleba district, about 160 kilometers away from GLK Student Fund’s home base in Bukoba. Ziada grew up with her twin brother Maulid. Both Ziada and Maulid shared a rather precarious upbringing. They were initially raised by their father and mother, the latter of whom suffered severe mental illness. Their father, under the strain of his wife’s condition eventually abandoned his children and later died.  Their only other relative is a maternal grandmother who is partially blind.

In spite of these challenges, Ziada persevered through her education. She excelled in her studies at Kishoju Secondary School. She is so far one of only three students from this high school to pass the national secondary school examination, as well as the only girl to do so. Ziada has ambitions to pursue her Bachelor’s of Education at the University of Iringa. However, Ziada needs your support in order pursue her career path.

Because we believed in Ziada’s commitment to her education and her ability, GLK Student Fund has advanced funds for her to begin a three year degree.  The costs were approximately $2,500 per year.  We are happy to report that Ziada was graduated in 2019 with a teaching diploma.  Congratulations Ziada!