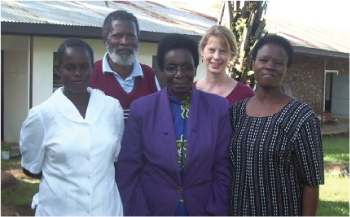 The trustees and directors of the scholarship fund – professionals in Tanzania and the US – ensure that only worthy and needy students are helped.   With your help, we can do more and help more students build hopeful futures of potential and productivity. Our trustees are all dedicated to the fund, and bring years of expertise in a wide variety of fields:education, law, social work, accounting, and nonprofit development. The fact that our directors and trustees are divided between Tanzania and the United States allows us to expand our reach, while also maintaining a more personal, grassroots approach to supporting  the community.

Steve has worked in the oil and gas industry for over 20 years.  He is a past Deputy Commissioner for the Department of Revenue for the State of Alaska and a consultant to the Alaska legislature on oil and gas tax and pipeline matters.  Steve is currently working as Deputy County Counsel in Inyo County, California.

Elizabeth is a special education teacher in California.  She was a speech and language tutor while she lived in Alaska. Elizabeth has also helped set up local charitable organizations such as Love Inc. and has been active in a variety of family support non-profits.  She has visited Tanzania on several occasions both as tourist and visiting teacher.

Judith also worked as a social worker and co-worker for the HIV & AIDS Unit of the Eastern and Coastal Dioceses of the Lutheran Church in Dar es Salaam, Tanzania.  She is currently “retired” and volunteering full time for several charitable organizations.

Samson studied architecture in Germany at University of Hannover.  He worked for the Evangelical Lutheran Church in Tanzania North Western Diocese.  Samson is currently working with Triple A Limited an architectural consulting firm where he is a partner.  He is also the incumbent Board Chairman of Kashozi Secondary School.  Samson is married and has four children.

Grace was a Deaconess with the Evangelical Lutheran Church of Tanzania for 15 years.  She has worked at Ntoma Orphanage, at Ndolage School of Nursing, and Kibeta English Medium Primary School – all in the Bukoba district.  She is currently head nurse at Bunazi Health Center in Tanzania.

Joyce has over 13 years teaching experience at Kyaitoke and Rwoga Primary Schools.  She also spent five years involved with the German primary schools in Recklinghausen, BRD.  Since 1999 she has been the founding head teacher of Kibeta English Medium Primary School in Bukoba, Tanzania.  She is married to Pastor Phenias Lwakatare and has five children.